Check out this great video about our beautiful academy.

BRAZILIAN JIU JITSU (BJJ) is a grappling-based martial art whose central theme is the skill of controlling a resisting opponent in ways that force them to submit. Due to the fact that control is generally easier on the ground than in a standing position, much of the technique of Brazilian Jiu-Jitsu (BJJ) is centered around the skill of taking an opponent down to the ground and wrestling for dominant control positions from where the opponent can be rendered harmless.

To control and overcome greater size, strength, and aggression with lesser size and strength is the keynote of the sport. This is done by utilizing superior leverage, grip, and position upon your opponent. Students of the sport gain a deep understanding of the workings and limits of the human body.

This knowledge can be used to subdue and control an opponent with whatever level of severity the student chooses. The path to this knowledge is physically and mentally demanding. Students benefit from greatly increased physical fitness, problem-solving ability, self-knowledge of brazilian jiu jitsu their body and mind and the many social benefits of working within a large group of like-minded fellow martial arts students as you learn and have fun together.

Renzo Gracie Riverstone is family focused Brazilian Jiu Jitsu academy, purposely located in Sugar Land at the border of Riverstone and Sienna Plantation in Missouri City, close enough to local neighborhoods to walk, bike, or scooter. We pride ourselves on our technical Jiu Jitsu, while connecting with our students for an extremely enjoyable Jiu Jitsu experience. Renzo Gracie Riverstone is a beautifully constructed Academy with an even better vibe. Full of smiling faces, you'll be sure to enjoy Jiu Jitsu as a member of Team Renzo Gracie. 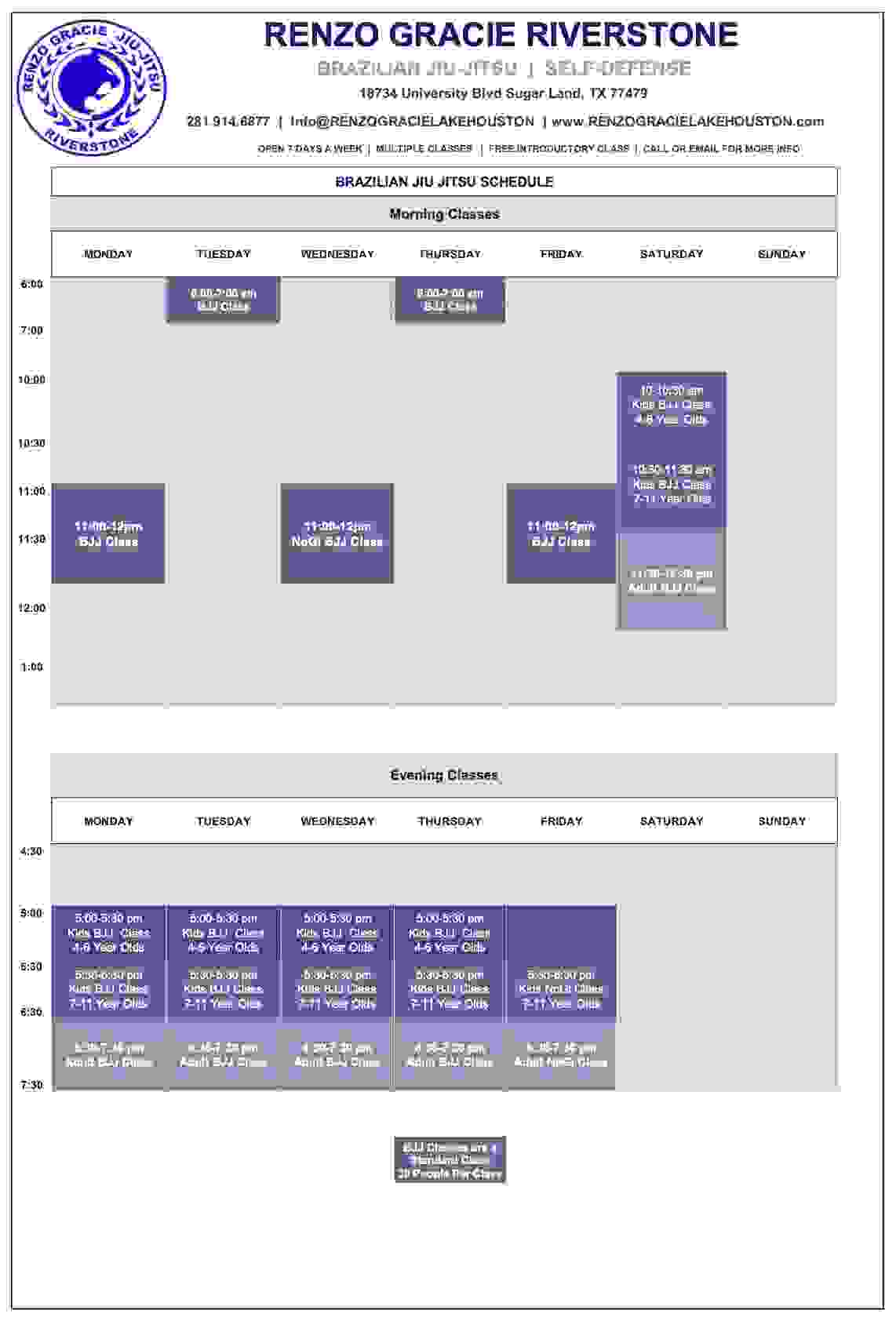 We offer training 6 Days a week, for all ages 4+, multiple times per day. Come try out a class for FREE and see what Renzo Gracie Riverstone and Brazilian Jiu Jitsu is all about.

Professor Joe Murphy is a 1st Degree Black Belt in Brazilian Jiu Jitsu under Professor Brian Marvin. He is an accomplished Grappler, Jiu Jitsu Practitioner and Competitor. He is equally accomplished as a Coach at the highest level of martial arts. Joe has a great Jiu Jitsu style, is amazing with kids, and his technical knowledge allows for ease of understanding at all levels.  Joe graduated from Arizona State University in 2018 with a Degree in Teaching specializing in Physical Fitness Education K-12.

Professor Joe  is the head instructor of  Renzo Gracie Riverstone. Professor Brian will be there often teaching and training Brazilian Jiu Jitsu. The Assistant Coaches are Coach Kenzie and Coach Luke.

Better yet, see us in person!

We love our customers, so feel free to visit our Brazilian Jiu Jitsu Academy during Class times or call/email for an appointment to tour our beautiful martial arts facility.